"End Game" Is Just The Beginning

I Dare You To Make Comic Book History This Weekend!

by The Comic Book Pusher

I have been an Entertainment Retailer for the past 30 years, and a comic book pusher for most of my adult life. Never in the history of comic books has there been a moment like this. As of this writing, the "Avengers End Game" movie has grossed more than a BILLION DOLLARS worldwide.
Over a billion dollars.
No lie.
So here's the plan. I want each and everyone of you who read this article to share it on all your social media platforms. Be it Facebook, Twitter, Instagram, Tumblr or whatever your favorites may be. I also want you to email it to your contact lists and post it on all your bulletin boards and get it out to all your fellow comic book fans. In fact, I dare you to share it.
I know what you're thinking: "Just what's your angle here, Mr. Comic Book Pusher? You want me to share this article on every social media and everywhere else I can. I don't go sharing just any article I read on the internet, so why should I share this one? To what end?"
Fair enough, so hear me out.
What isn't immediately obvious is that the planets have aligned for us comic book fans, that we are at a golden moment, that an opportunity has delivered itself to us, dear reader, to bring in a whole new wave of comic book fans. It's a chance for you to be what I have so loved being for so many years -- your friendly neighborhood comic book pusher.
The reason is that this Saturday, May the fourth, is Free Comic Book Day (FCBD). Hundreds of millions of people will have seen the movie by this coming Saturday. Many of those movie goers have never held a comic book in their hands. Oh, they know all about the "Marvel Cinematic Universe" as its called. They can tell you all about the Avengers in those films, and all their villains, how the movies tie into one another, and even into some T.V. shows. And that's okay. But so many have never set foot in a comic book store, much less read a comic book. As a comic book fan like me, you know what they're missing.
That's why this particular FCBD offers us a unique opportunity to bring more new comic book fans into the fold than ever before. But we have to amass our forces, work together and get them to join in on the fun and freebies of FCBD. I'm daring you to be part of my "Comic Book Fan End Game". If we can bring in enough newbies to the comic book stores on FCBD, we could turn them on to a lifetime love for comic books. Like me, you know the stories did not begin with "End Game" and they don't end there either. Like me, you know there are millions more stories that they can enjoy, something for every taste, from super heroes to horror, from sci-fi to fantasy. We need to show them the world that we love so they can fall in love with it, too.
Share this article and we can make pop culture history this Saturday. But you have to act fast, you have to share this article NOW to get the maximum effect.
But it can't stop there. Once the article has reached enough comic book fans, we need you all to find the friends who love the movies but have not been exposed to the world of comic books directly. Invite them to join you this Saturday at your favorite local comic book store. Let them see how much more there is behind those Silver Screen adventures.
One day you'll look back and remember that you were part of the effort to bring the movie fans into the comic book stores. That you helped make it happen. Share this article and bring a newbie to FCBD this Saturday and you WILL be part of comic book history. Because if you do, and if you dare to share this article and if enough of us rally the uninitiated into the comic book stores across the country then this FCBD will be the beginning of a surge in the hobby like never before. And you know they will love you for bringing them along. 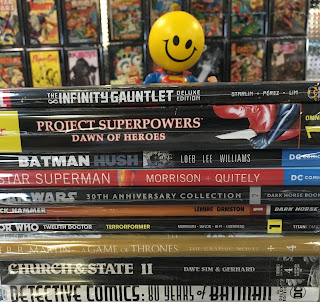 It's up to us. We won't get any help from Hollywood. You've never seen a comic book based movie open up with one of the famous actors telling the audience how they can find more adventures like this at their local comic book store. No end credits will ever pause to direct you to support your local comic book shop. No comic shop locator info will flash before the audience's eyes. They just won't do it. It really is up to us.
So let's make this happen this weekend. Let's make pop culture history together. Let's turn the movie fans into life-long comic book fans. Show them the world you know and love, the many fantastic worlds within the comic books.
I dare you. In fact I Triple Dog Dare ya to be a comic book pusher just like me, The Comic Book Pusher.
If you can't make it to your local comic book store this weekend, then bring them along the following week, maybe on Wednesday to show them "New Comic Book Day" that happens every week at all the comic shops. Or bring them to the next Halloween ComicFest in October.
When you get there, tell 'em The Comic Book Pusher sent ya.

Popular posts from this blog

Welcome Back My Friends To The Show That Never Ends We’re So Glad You Could Attend, Come Inside, Come Inside

The Comic Book Pusher
I am a children's book author, blogger and life-long comic book pusher.