How On Krypton Did I Get Here? Part One: TV Turned Me On

Let me begin by openly and unapologetically admitting that I have been pushing comic books to almost every last person around me all of my reading life. From turning my childhood friends on to Harvey Comics titles like Hot Stuff and Richie Rich back in the early sixties, to hyping the latest issues of Brightest Day and Shadowland at The Comics Club to a clientele weary of seemingly endless "crossover events", I have coaxed and lured the uninitiated into reading comics, and pushed and pimped the literary art form known as the comic book continuously, tirelessly and without shame.
Would I intentionally give a child a comic book to get them hooked on reading? No doubt. Just stop by The Comics Club the first Saturday in May and watch me. The first one's free, kid!
An obsession? Perhaps. An occupation? Absolutely. A life worth living over if given the chance and the right financial incentive? An unmitigated "Yes!" I have led a truly blessed life, and comic books have almost always been a part of the journey.
The title of this blog implies a promise of confessions within, a promise that I promise to deliver on as often as possible. To that end, I'll share with you my first soul wrenching confession -- the dark and terrible secret truth at the core of my comic book addiction:
It wasn't an actual comic book that got me hooked on comics. What's more, it happened when I was just a toddler, well before I could even read. My "gateway drug" into the world of comic books was . . . The Adventures of Superman television show.
It's true. When I was but a wee lad, my dear old mother, though not so old at the time, would sit my little brother and me down in front of the magical box of black and white wonders for another exciting episode of Superman's adventures. For so many moms like mine, that amazing device was a godsend for helping them get everything done that needed done in the short hours of the day for a household of so many people (I was the seventh of eight children in my family). Even with its simple monochromatic display, the "TV" was a portal to worlds a child like me could only dream about. 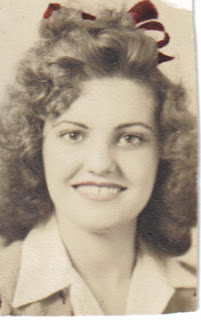 The Comic Book Pusher's mom.
(For your part in what would become a lifelong addiction to comic books . . . thanks, Mom!)

That is, until I discovered comic books.
I don't know exactly when I first got my hands on a copy of a Superman comic book. Thanks to my older brothers and sisters several other comic book titles made their way into my comic-hungry hands long before the Man of Steel would excite my young imagination. Archie, Casper the Friendly Ghost, Hot Stuff, Little Dot, Richie Rich were all taken greedily and consumed almost instantly. I just could not get enough of that fiery neuron stimulation that only comic books could supply.
Then one day when I was about six years old I read an issue of Superboy and the Legion of Super Heroes.
Super . . . boy?
Superman when he was a boy? The television show never said anything about Clark Kent being a superhero in Smallville when he was a kid. I was flummoxed, flabbergasted, but mostly I was thrilled! A boy, just a kid like me, with amazing superpowers! I wanted to be like Superboy!
Okay, confession time: Actually, I didn't want to be like Superboy, I wanted to be Superboy.
I wanted to beat the bad guys, stop every bully, and defeat every criminal. I wanted to be faster, stronger, smarter, and braver and have Good always triumph over Evil. I wanted to be able to right all wrongs. I wanted to always tell the truth and do good deeds. Most of all, I wanted justice to prevail. I wanted a black and white world where what was good and what was evil was clear-cut, nothing was gray, and good would always win in the end. Always.
Deep inside, I wanted desperately to believe that I really could be Superboy.

Next in "Confessions":
How On Krypton Did I Get Here? Part Two: Invisible Hands

Popular posts from this blog

April 30, 2019
"End Game" Is Just The BeginningCalling All Comic Fans:I Dare You To Make Comic Book History This Weekend!by The Comic Book Pusher     I have been an Entertainment Retailer for the past 30 years, and a comic book pusher for most of my adult life. Never in the history of comic books has there been a moment like this. As of this writing, the "Avengers End Game" movie has grossed more than a BILLION DOLLARS worldwide.
Over a billion dollars.
No lie.
So here's the plan. I want each and everyone of you who read this article to share it on all your social media platforms. Be it Facebook, Twitter, Instagram, Tumblr or whatever your favorites may be. I also want you to email it to your contact lists and post it on all your bulletin boards and get it out to all your fellow comic book fans. In fact, I dare you to share it.
I know what you're thinking: "Just what's your angle here, Mr. Comic Book Pusher? You want me to share this article on every …
Post a Comment
Read on »

We Interrupt This Blog For A Burst of Cranial Flurry . . .

December 30, 2010
By The Comic Book Pusher
A customer came in the store a few minutes ago and asked for current-size comic book bags and boards. Not only do we carry a wide variety of collecting supplies, we happen to be having a sale on those items right now. I told him he could save more in the long run by buying two, because the third one would be free.     "I really don't need that many," he said blandly.     "Ah, but you will eventually need them," I said enthusiastically, "and you'll have saved yourself a lot of money in the long run," I encouraged.    "Wow," he said, rather deadpan. There was a flavor of apathy in his tone. "That's a good deal, but I'm actually cutting back on comics and trimming down my collection." Bam! Pow! The sudden, unexpected assault on my capitalistic senses slammed me in the hip, right around the wallet region. I began to feel a little dizzy.    "Cutting back"? "Trimming down"? I could hear …
5 comments
Read on »

Welcome Back My Friends To The Show That Never Ends We’re So Glad You Could Attend, Come Inside, Come Inside

The Comic Book Pusher
I am a children's book author, blogger and life-long comic book pusher.